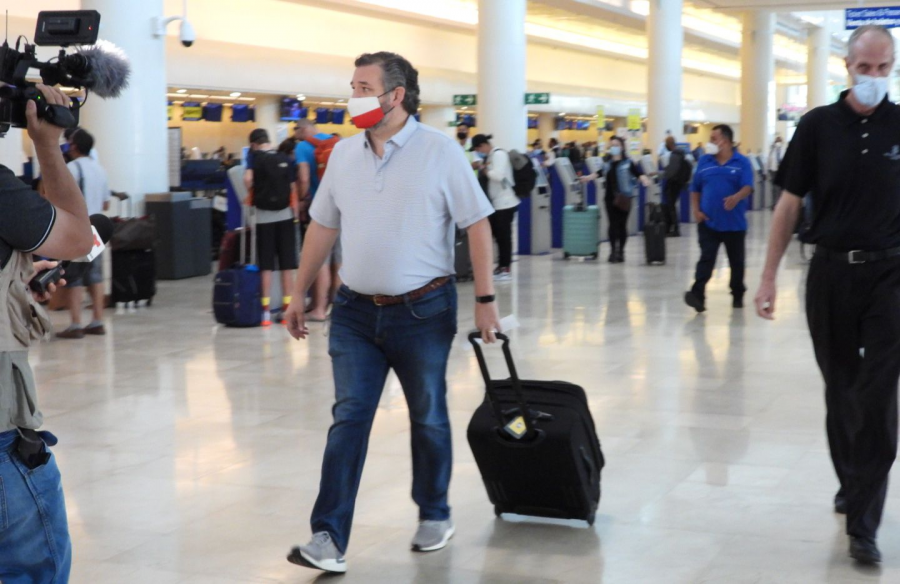 Senator Ted Cruz returns to Houston from Cancun on February 18, 2021.

In the midst of a massive snowstorm that left millions of Texans without heat or electricity, Texas Senator Ted Cruz is receiving widespread backlash for leaving the state and heading to a resort in Cancun, Mexico.

The snowstorm hit Texas on February 15, as temperatures across the state dropped to the single digits. Over the next couple of days, massive power outages ensued and 26 people died as a result of the freezing temperatures.

On Wednesday, February 17, when over three million Texas residents were still without power, Senator Cruz was seen boarding a plane in the Houston airport with his family. After pictures of him on the plane were posted to social media that evening, the images quickly went viral.

Criticism poured in across various social media platforms and from notable figures like Beto O’Rourke, who challenged Cruz for his Senate seat in 2018. O’Rourke condemned Cruz for “vacationing in Cancun when people are literally freezing to death in the state that he was elected to represent and serve.”

The following day, Senator Cruz returned to Houston and released a statement defending his actions, saying, “With school canceled for the week, our girls asked to take a trip with friends. Wanting to be a good dad, I flew down with them last night and am flying back this afternoon.”

Unfortunately for Cruz, his attempt to alleviate the criticism backfired and he was quickly called out for placing the blame for the trip on his young daughters.

“Rather than taking responsibility for his decision to leave the country for greener pastures and abscond his duties as an elected official, Cruz on Thursday blamed his daughters, who are 10 and 12, for the whole thing,” wrote one reporter.

Additionally, Senator Cruz’s claim that he had planned all along to return to Houston immediately was contradicted after a series of text messages were leaked. The texts, which were sent from Cruz’s wife Heidi Cruz to several neighbors, were verified by the New York Times.

“Anyone can or want to leave for the week? We may go to Cancun,” she asked. She then sent information for flights leaving for Cancun on February 17 and returning on February 21.

Senator Cruz later apologized for the trip, saying it was “obviously a mistake.”

“In hindsight, I wouldn’t have done it,” he told reporters. “I was trying to be a dad.”