Joe Biden elected as the next President of the United States 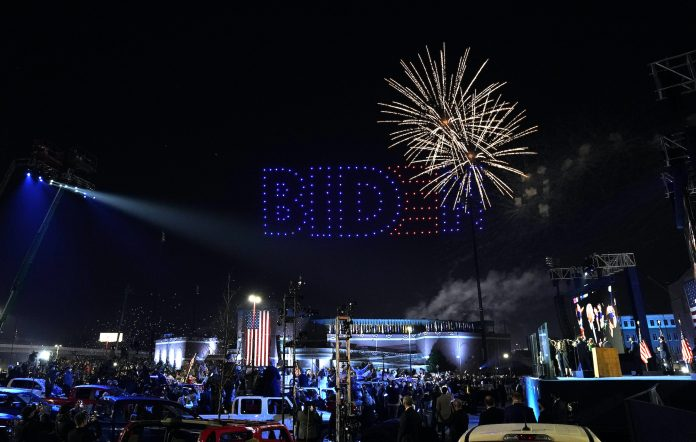 President-elect Joe Biden and family watch fireworks from the stage after Biden's victory speech on November 07, 2020, in Wilmington, Delaware.

In an unprecedented four-day-long election, Democratic candidate and former Vice President Joe Biden won against incumbent President Donald Trump for the presidency. Biden received 290 electoral votes and Trump behind with 217 electoral votes. Biden’s victory is attributed to his ability to flip Wisconsin, Michigan, Pennsylvania, and Arizona which voted Republican in the 2016 presidential election. Votes are still being counted in North Carolina and Georgia and a winner has not been declared in either state.

Tensions were extremely high from Tuesday, November 3 to Saturday, November 7 as all Americans waited anxiously for the election results. This year, the votes took up to four days to count because of the COVID-19 pandemic. More Americans than ever opted for mail-in ballots to vote as a way to maintain social distancing protocols. Mail-in ballots arrived at polling stations after election day which extended the time it took for volunteers to count ballots.

Former Vice President and new President-elect, Joe Biden, gave his victory speech on the night of Saturday, November 7. Before Biden spoke, Vice President-elect Kamala Harris took the stage to give a speech of her own. Harris made history in this year’s election by becoming the first woman and person of color to be elected as the US Vice President. For her speech, Harris wore a white pantsuit as a tribute to the suffragettes who fought for a woman’s right to vote in the early 20th century.

Harris reflected on her historical victory in her speech, touching the hearts of women and people of color across the nation. On the future of diversity in American politics, Harris said, “While I may be the first woman in this office, I will not be the last, because every little girl watching tonight sees that this is a country of possibilities.”

She attributed her nomination to run with Biden to his character, saying, “Joe’s character… he had the audacity to break one of the most substantial barriers that exist in our country and select a woman as his vice-president.”

Following Harris’ speech, Biden jogged to the podium to address the nation as the President-elect. In an important moment of his speech, Biden expressed empathy for the loss of all Trump voters in America.

“For all those of you who voted for President Trump, I understand the disappointment tonight,” Biden said, “I’ve lost a couple of times myself. But now, let’s give each other a chance.”

President Donald Trump is now one of ten US Presidents who has failed to win reelection for a second term. The last president to lose re-election was George H.W. Bush who lost to Bill Clinton in 1992. President Trump has not yet conceded to Biden even though he has officially been declared the winner by multiple news outlets.

On Twitter, he stated, “I won this election, by a lot!” President Trump announced that he will have the courts investigate voter fraud in an attempt to prevent Biden from taking his spot as President. Despite having no official evidence, Trump continues his claims that the Democrats rigged the election against him.

In the congressional elections, the Democrats retained their majority in the House while the Republicans retained their majority in the Senate. In North Carolina’s state elections, incumbent Roy Cooper won against Republican Dan Forest for governor and incumbent Thom Tillis won against Democrat David Cunningham for North Carolina’s second Senate seat.