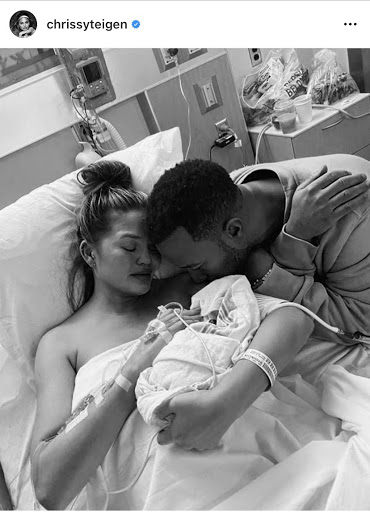 Coming home from the hospital with no baby feels wrong. On September 30, Chrissy Teigen took to Instagram with “…To our Jack – I’m so sorry that the first few moments of your life were met with so many complications, that we couldn’t give you the home you needed to survive. We will always love you.”

On October 14, John Legend performed at the Billboard Music Awards, dedicating his performance to his wife, Chrissy. He wrote on Twitter, “This is for Chrissy. I love and cherish you and our family so much. We’ve experienced the highest highs and the lowest lows together. Watching you carry our children has been so moving and humbling.”

Chrissy Teigen and John Legend were expecting their third child together due sometime in late February or early March of 2021. When complications arose with Teigen’s pregnancy, they arrived at the hospital sooner than they had expected. Soon after Teigen took to Instagram hundreds of celebrities and thousands of fans showed their support and expressed sympathy towards their family.

Kim Kardashian wrote, “We’re always here for you and love you guys so much.” Hailey Bieber wrote, “I’m so so sorry. Thinking of you and John, praying for you guys and sending you so much love during this time.” Other well known names such as Dwayne Johnson, Dove Cameron, Khloe Kardashian, Paris Hilton, Hilary Duff, Jesse Tyler, and Gabrielle Union also commented their sympathy showing the family how much they are loved. These are just a few of the celebrities that reached out and showed love and sympathy towards Chrissy and her family.