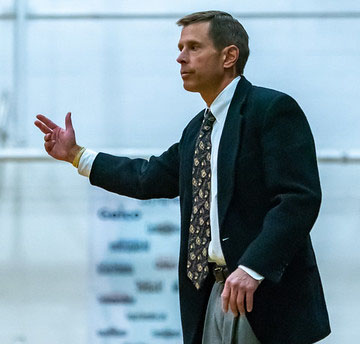 The Broughton men’s basketball team came into this season hoping to replicate their tremendous success during the 2017-2018 campaign.

This year’s squad is led by head coach Jeff Ferrell. Coach Ferrell has coached the Caps for 22 years, and has coached at some level for 29 years.

Coach Ferrell made it clear that this his last season at the helm of the Broughton basketball team.

“I’ve been coaching for 29 years, I don’t have as much energy as I once did,” Ferrell said when asked about his reasoning.

“It’s the right time for me personally, I’m going out on my own terms. I don’t regret a second of it,” Ferrell said.

Senior Will Lam is this year’s team manager. He records game statistics and assists Coach Ferrell.

The squad lost some of its key contributors after last season, with the graduation of Jalen Finch, Keyshawn Dorsey, Tyler Palmer and Darian Williams. With the departure of these dynamic playmakers, returning players need to step up and take on larger roles.

This year’s senior class has impactful players and leaders.

DJ Thomas and Tynias Peace are a dangerous backcourt pairing, who carry a large amount of the scoring load.

KJ Haywood was a late addition to the roster, joining the team shortly after football season. His athleticism and defensive efforts are huge for the team.

The team also gets a nice contribution from the underclassmen. Jack Thorne, junior, is the only returning underclassmen. He was the lone sophomore on the varsity team last year, and he impressed in limited minutes played.

There are three sophomores on this year’s squad: Jack McConnell, Jackson McNamara, and Hampton McQueen. These guys will learn valuable skills playing with more experienced players, which they will use for their remaining years on the varsity team.

The 2018-2019 season began with a narrow loss to Justin McKoy, and the Panther Creek Catamounts at home.

In the following game, the team took a trip to Cary and defeated the Imps in double overtime. This victory marked coach Ferrell’s 400th win as the Broughton head coach. Peace dropped 25, and Thomas added 20 more in the narrow victory.

The team split the next two games, falling to Rolesville at home in double overtime, then defeating Green Hope on the road in the following contest.

In the win over Green Hope, all four active seniors scored double figures: Thomas with 25, Peace with 19, Sealey with 18, and Eller with 13. With this win the team improved to 2-2, with a 2-0 record on the road.

The Caps dropped their next two games, narrowly losing to Wakefield on the road, then losing to DJ Robertson and Athens Drive at home.

In the final game before winter break, the team routed Hoggard 77-44. The two sensational guards, Peace and Thomas, led the team to this impressive victory.

Over winter break, Broughton hosted the annual John Wall Invitational in the Holliday Gym. Teams from all over the nat ion travel to the heart of Raleigh to compete in front of an electric crowd.

Broughton was placed in the David West bracket with other impressive teams; including Brewster Academy (NH), Trinity Christian (of Fayetteville), And Downey Christian (FL).

Broughton faced Downey Christian with a rowdy crowd in attendance in the Caps first game of the tournament. Internet sensation Julian Newman wanted to prove himself this year, following a 20 point loss to Broughton at last year’s tourney.

Newman’s dreams turned into nightmares from the start of the game: Downey Christian fell behind early, and the Capitals exploded. After four quarters, Broughton had scored 93 points to Downey Christian’s 58.

Thomas had an exceptional game, scoring 30 points and locking up his opponent on the defensive end. Penn Sealey also had a sensational performance, dropping 24 points.

In Broughton’s second game of the tournament, TCS came to play. Greg Gantt, Providence commit, led the charge for TCS.

Broughton did not back down, controlling many aspects of the game down the stretch, and holding the lead at some points. In the end, Trinity Christian pulled away. The final score was 60-48.

The Caps then headed into the third-place game against Virginia Episcopal School. The Caps played strong and knocked off VES to claim the 3rd overall finish in the David West bracket.

DJ Thomas was named the Most Outstand Player (MOP) of his bracket after averaging 20.3 points and 3.7 steals per game.

Following the John Wall Invitational, the men kept their momentum going. The team won 4 straight, defeating Enloe, Leesville, and South East at home, and Gibbons on the road.

In the Leesville game, the score was tight in the late minutes of the fourth quarter. With Broughton down one, and the clock ticking down, Thomas took it to the rack and made the tough shot at the buzzer. The Caps won 62-61.

Since the Leesville game, the Caps have won three games and lost two games. The team beat Cardinal Gibbons, Southeast Raleigh and Middle Creek, with losses against Sanderon and Milbrook.

The Caps are now 10-7 for their season and 4-2 for the conference and look to keep improving their record with a hope to make playoffs.