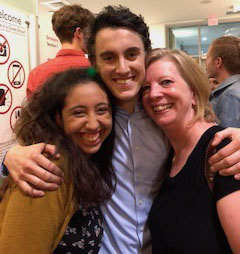 Junior Sterling Jones is on his way to Broadway this summer after being named best high school musical actor in central and eastern North Carolina.

He received the award Tuesday, May 15, at the Durham Performing Arts Center after competing with 19 other contestants in the Triangle Rising Stars competition.

“I’m so proud of Sterling.  He is very talented, and I have had the pleasure of working with him for three years,” vocal teacher Chris Conley said.

He was among 20 finalists to perform Tuesday, May 15.  Those 20 were narrowed from a field 0f 150 actors and actresses.

Jones was selected to compete in Triangle Rising Stars for his portrayal of Gaston in Broughton’s spring musical production of “Beauty and the Beast.”

He also received special recognition for the contestant with the most positive attitude.  That award was voted on by his fellow actors and comes with a $250 gift certificate to Crabtree Valley Mall.

Conley was pleased by the recognition.

“He is supportive of his fellow classmates and performers.  He is passionate about his arts and compassionate to the artists with whom he works.  I love this kid,” she said.

Triangle Rising Stars is a qualifying event for the National High School Musical Theatre Awards—better known as the Jimmy Awards after a Broadway producer—and is presented by the Broadway League Foundation each summer.

Jones receives a $2,000 academic scholarship and an all-expense paid trip to the national musical theater competition this June in New York City.   Before the national competition, Jones and other award-winners from across the country will receive 10 days of training with the NYU Tisch School of the Arts studio.

The final national awards program will occur at Nederlander’s Minskoff Theatre on Broadway, home stage for performances of “The Lion King.”  Jones will be among 80 musical theater students from across the country competing for the Jimmy Award, including senior Mya Ison from Enloe High School who received the best actress award at the Triangle Rising Stars competition.