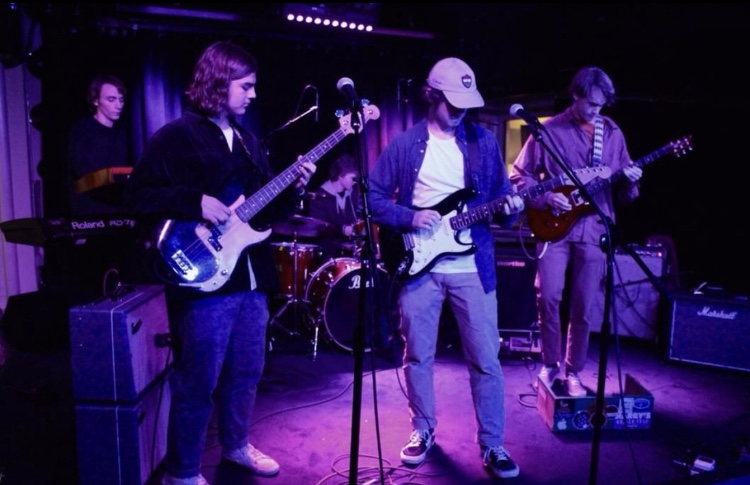 You may be wondering, what is PHLUPHY? PHLUPHY (pronounced: fluffy) is a psychedelic rock band based in Raleigh.

The band consists of five aspiring musicians, four of whom attend Broughton.

Senior Lee Sullivan plays the saxophone and guitar for PHLUPHY. He also produces his own music outside of the band.

Senior Carter Hodl plays the guitar along with Sullivan, and is the lead vocalist of the group.

Junior Aaron Huntley is the son of George Huntley, who was the lead guitarist for the famous band, The Connells. Huntley is PHLUPHY’s bass guitarist.

Junior Gray Renfrow is the band’s drummer. He is an experienced musician, having played the drums since the age of four.

Everything about this band is unique, from their interesting name to their unique style of psychedelic rock music.

Sullivan remembers the moment the band got its name like it was yesterday.

“The name comes from one of our favorite songs called Fluffy by Chon. Gray said we should be Fluffy, but with a Ph and we were all like ‘aye’,” said Sullivan.

PHLUPHY has an unorthodox sound, mixing rock and jazz music with a psychedelic hint to it. Huntley says the band gets inspiration from many places.

“We’re all jazz musicians, so we tend to borrow a lot from jazz standards. But as a band, our sound is heavily influenced by psychedelic rock bands such as Tame Impala and Pond,” said Huntley.

PHLUPHY has played at a few events, with more on the way. The band has played at the Enloe Music Club Space Jam as well as the Queen of Hearts assembly.

The group has a couple of gigs coming up. They will play at the 2018 Coming of Age Art Showcase on March 16th. The band will also play at the Garden Gallop, organized by the Broughton Food Ark, on the following day, March 17th.