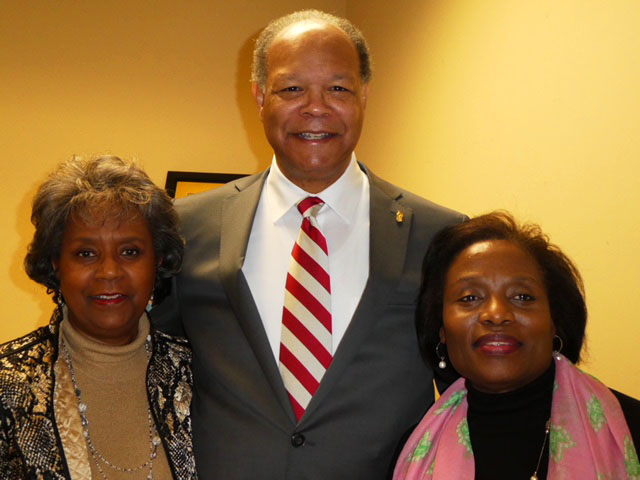 Dr. Clarence G. Newsome, the first African-American to play football for Duke University, was the featured speaker at the Black History Month assembly on Friday, Feb. 16, in the Diane Payne Auditorium.

The event, coordinated by English teacher Ava Closs and Broughton’s Distinct Youth Club, is a celebration of black history and culture in today’s American society.

This year did not fall short of this label as an assortment of culturally positive performances were showcased in front of Broughton’s student body. After a welcome from ceremonial masters Jemima Liteli and Alex Agnolutto, Stephanie Lassiter displayed her vocal chops by singing “Lift Every Voice and Sing.”

A  modern African dance was then performed by Jemima Liteli and members of the Broughton Dance Department, followed by a performance by the Gospel Choir..

Dr. Newsome, a past preacher and college football player, began his sermon-like address with a thesis worth noting; “Lest we forget.”   He was introduced by Broughton football player Jalen Bobbitt.

Newsome referenced stories of African American triumph in the United States. Spinning tales of little known historical figures such as Margaret Garner and James Bradley, Newsome managed to educate his audience of the value of remembering America’s troubled past with race relations, while maintaining an engaging and sincere vibe.

Newsome urged students to celebrate the great achievements of current times while also remembering the struggles of the past.

He appealed to everyone’s sense of humanity, urging those knowing of the past struggles of African peoples in American and all over the world to educate others, and most importantly, never forget.

Newsome’s talk was followed by a dramatic rendition of “Sister to Sister” by Dr. Rhonda Hatton and a steel drum solo by Jerome Frederick, a substitute teacher.