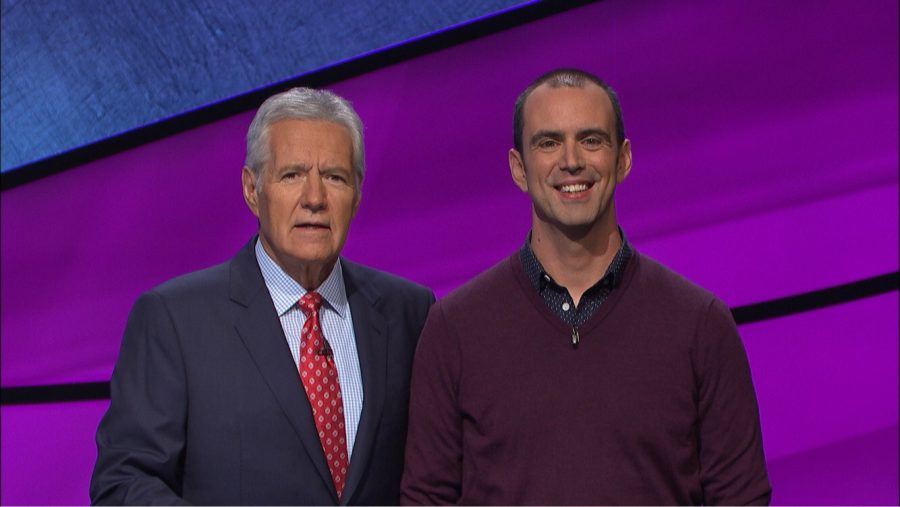 IB Coordinator and Theory of Knowledge teacher by day,  Lee Quinn took on a different role this past week – a first place contestant on the 34th season of the world-renowned TV show – “Jeopardy!” on television network ABC. Quinn won $22,400 on Wednesday night and $20,400 on Thursday night, with a total of $42,800 so far. On Friday night, he came in second place and added $2000 to his previous total winnings.

With a graduate degree in teaching and an undergraduate degree in both history and religious studies from University of North Carolina at Chapel Hill, Quinn is a more than qualified candidate for the intense, general knowledge game show, hosted by Alex Tribeck.

However, it was not something he had thought much about – until someone sent him a link to the application test.

The Atlanta audition, at a large hotel, could have been the end of his three- year journey to the Jeopardy! stage.

“I almost didn’t make it the audition because I drove into the parking garage and the door was locked,”  Quinn said.

Fortunately, he made it in time – and proceeded to take yet another test, full of a myriad of subjects and conversing with other possible contestants.

Quinn was happy with the experience, but after months of not hearing from the show, he assumed he had not been chosen – which is why it was such a surprise when they finally selected him.

Sure enough, it was Jeopardy, and next thing Quinn knew, he was on a plane to the coast. He left early, celebrated his birthday with a few old friends, and then taped at Sony Studios on November, bringing with him three suits (they tape multiple episodes in a single day) and a good attitude.

Taping the show “was a blur. I don’t really remember many of the questions or the games,” Quinn said.

Although he might not remember content, he emphasized that he definitely enjoyed being on Jeopardy!, saying, “It was worth it. I would do it again.”