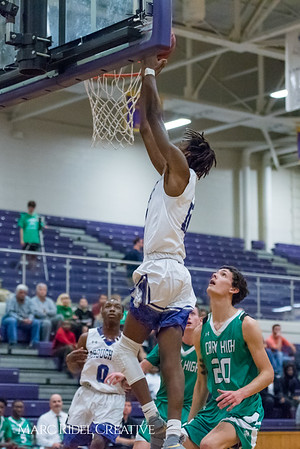 The Broughton men’s basketball team is off to a stellar start to the winter season with a 6-0 record. The Caps have defeated Cary, Knightdale, Rolesville, Apex, Southern Durham, and Athens Drive. The next game is at home on Thursday, December 7 against Middle Creek.

The Caps start conference games next Friday against Southeast Raleigh High School. With this being the first year of the new conference, the Cap-7, Broughton is not very familiar with some of the new teams in the conference.

On Tuesday, December 5 the Caps battled Cary High School, and won 72-65 at home. The student body came out to support the Caps with a tropical themed student section. There was a limbo contest at halftime of the game and a tropical smoothie gift card was awarded to the winner.

As the Caps prepare for the start of the conference games, they are being led by captains, Jessup Lowe, Tyler Palmer, and Jalen Finch. According to Max Preps, the team is currently ranked 17 in the state as they enter the conference season.