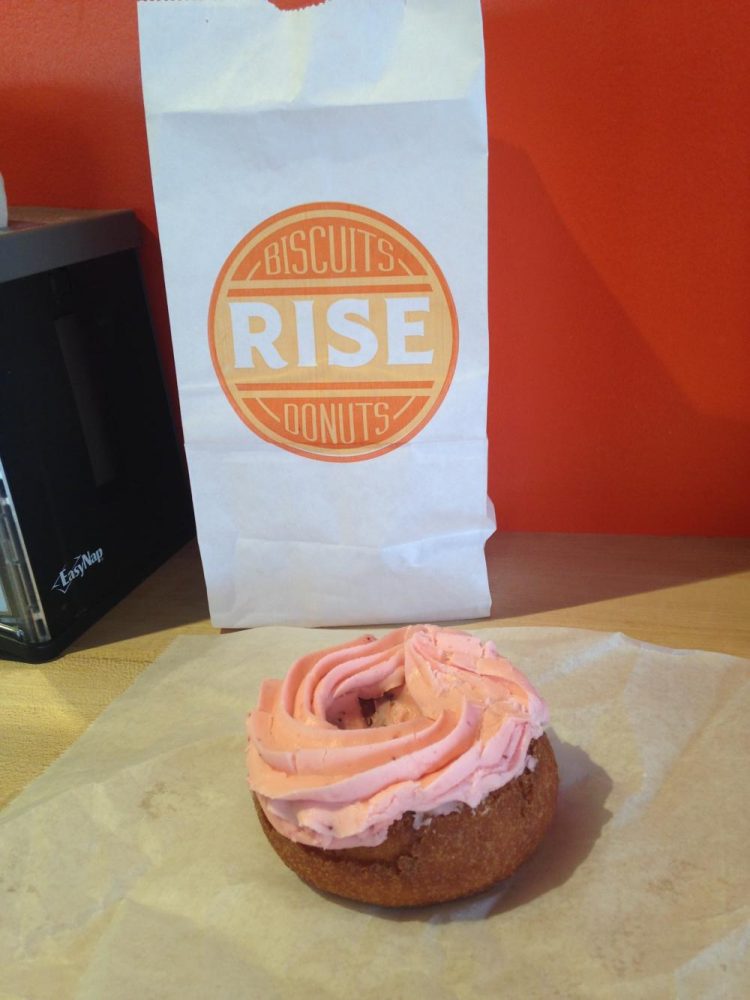 Raleigh is surrounded by a plethora of good doughnut places, and each franchise has something unique to offer. Whether specialty doughnuts or just good old glazed, these doughnut stores are sure to make anyone’s mouth water.

Rise is a convenient option for off-campus lunch when in search of a delicious biscuit or doughnut. It has been in Cameron Village since December 2015.

This store gives customers the choice between 15 different doughnuts, and the doughnut options change the first Wednesday of every month to provide a good variety.

There’s ten basic doughnuts that are the same in every store, and the other five can rotate at the various locations. They serve “old school” doughnuts such as glazed, sprinkles, and chocolate icing, but they also have other unique flavors like apple fritter, nutella icing, and banana pudding.

They also sell award-winning biscuits that are a good alternative to their donuts. Rise has been awarded by Indy Week for best biscuits from 2013-2016 in addition to being on the list for top 100 best breakfast biscuits and on the top 100 list for best biscuit/donut places in the area.

Krispy Kreme is another familiar place to most Broughton students. Located just off of Peace Street, the store’s “hot light” has been attracting customers for years.

Although known for their original glazed doughnuts, Krispy Kreme offers a diverse selection of other kinds. They include many combinations of powdered, iced, glazed, and filled doughnuts, in addition to doughnut holes.

When looking for festive doughnuts, Krispy Kreme is the place to go. The store normally makes special celebratory doughnuts for different holidays and events.

For example, the franchise makeS green glazed doughnuts for Saint Patrick’s day, heart-shaped sprinkled doughnuts for Valentine’s day, and even chocolate-covered, filled doughnut with a lightning bolt to get people excited for the release of the new Power Rangers movie.

Krispy Kreme is also home to other treats such as coffees, ice creams, bagels, and oatmeals. Next to their incredible doughnuts, the store might be most well-known for the Krispy Kreme Challenge where participants run from the NC State belltower all the way to the Krispy Kreme in Raleigh, eat a dozen doughnuts, and then run back to the belltower to raise money for Duke Children’s Hospital.

Another place to get tasty doughnuts is right off of Creedmoor Road. Duck Donuts is a little longer of a drive at 20 minutes from school, but their made-to-order doughnuts are worth the distance.

The company is originally named for Duck, North Carolina, located near the Outer Banks. The founder was inspired by the lack of doughnut places at the beach, and therefore he decided he would start his own brand.

The big factor that sets Duck Donuts apart from its competitors is that each individual doughnut is hot and ready.

There is no display case full of stale doughnuts because everyone is made on the spot, the minute someone orders. The cake base is made even more soft and melty after it is sent through the warming conveyor belt, enhancing the flavors.