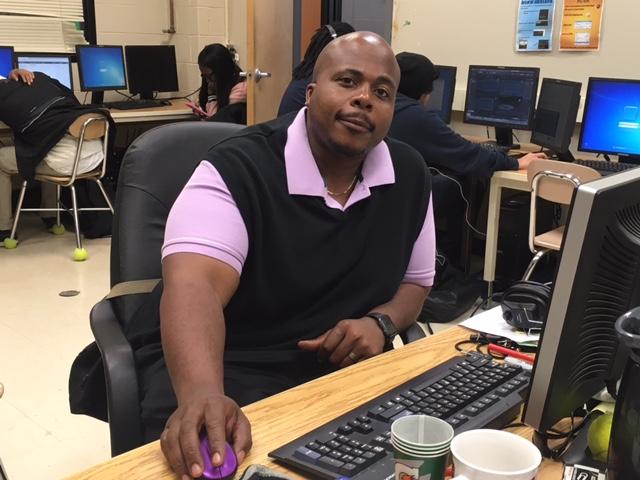 Dorrian Stephens, teacher, alumnus, and coach, has spent much of his life involved here at Broughton.

As a student, Stephens was a part of the original WCAP team but admits that his motivation to help start it was not purely based on interest. He recalls that back when he went to Broughton, classes were 45 minutes each and when he was told he could get out of first period 20 minutes early, he was sold.

Stephens did not always attend Broughton, though; he went to Enloe as a freshman. He said one of his favorite things about Broughton was the number of activities that were offered to him as a student.

“Broughton has a lot more activities than a lot of other schools, you just have to plug in to get yourself. You had to be assertive to get yourself involved,” Stephens said.

In 2000, Stephens returned to Broughton as a teacher. He currently teaches Scientific Visualization I and II as well as Game Art Design.

Even before he started teaching, Stephens served as a coach. At Broughton, he is an assistant coach for the football team and head coach for the softball team.

Growing up, Stephens played football from fifth grade through college where he played for North Carolina A&T.

His last year of collegiate football was pivotal for him. His head coach had made him come to hate football, and it wasn’t until he went to Northeast Guilford High School to student teach that he remembered why he loved it.

One of his students was saying all the things he loved about football and how much fun he was having, and that made Stephens realize why he had enjoyed it in the first place. This moment sparked Stephens’s return to football and pushed him to coach.

He also began coaching varsity softball. He is married to a former collegiate softball player and current collegiate coach, Theresa Stephens, who is currently serving as a substitute teacher for gym classes.

This year, Stephens took on the challenge of coaching both a varsity and J.V. softball game.

Now, even after 20 years of coaching, Stephens still remembers some of his proudest and most rewarding moments from serving as a coach of two sports.

One of Stephens’ fondest coaching memories is seeing a player score his first touchdown. The player, who went by ‘C4’, was smiling so big that anyone could see it through his helmet.

Stephens described this as a “get choked up moment” when he has been able to see players achieve something they’ve been working towards.

Teaching and coaching are two absolutely necessary roles as they motivate students to work hard, learn more, and improve their skills and talents.

On the flip side of that, teaching and coaching are also beneficial for the teacher and the coach. Stephens recalls how much he has learned from being in these two positions.

“I have learned patience and that I have to see things from all points of view. I don’t just coach the sport, I coach the person. It’s the relationships that are built with the person,” Stephens said.

Stephens mentions how important building relationships is in teaching and coaching. Getting to know individuals better and caring about them are two things that are paramount; both come before a student’s ability to perform.