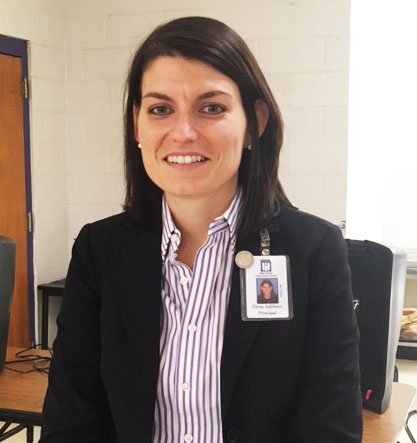 She replaces Stephen Mares who is currently principal at Athens Drive.

Ashburn is excited to be the principal of Broughton and is looking forward to her first official day.

“I love working in high school.   I cannot wait to get to know the amazing students at Broughton and to be involved in the many events and extracurricular opportunities that make high school such a fun experience,” Ashburn said.

Ashburn is young but has a lot of experience. She began her career teaching high school English at Southern Durham High School. After her time as a teacher, she shifted her focus to becoming a principal.

Before Ashburn began her career in education, she attended Longwood University as an undergraduate and the University of North Carolina-Chapel Hill for her Masters of School Administration. Ashburn is currently a doctoral candidate at UNC-Chapel Hill in the Educational Leadership program.

Aside from school and work, Ashburn has a fun life with her husband, Matt, a Broughton graduate, and her two daughters named Lucy and Reeves.

“I am humbled by the opportunity to serve as Broughton’s next principal. Broughton is a unique school rich with history and tradition. I look forward to honoring the school’s past while also working alongside students, staff, and the community to ensure Broughton is an exceptional place to teach and learn,” Ashburn said.

Roy Teel will  served as interim principal until she arrived.