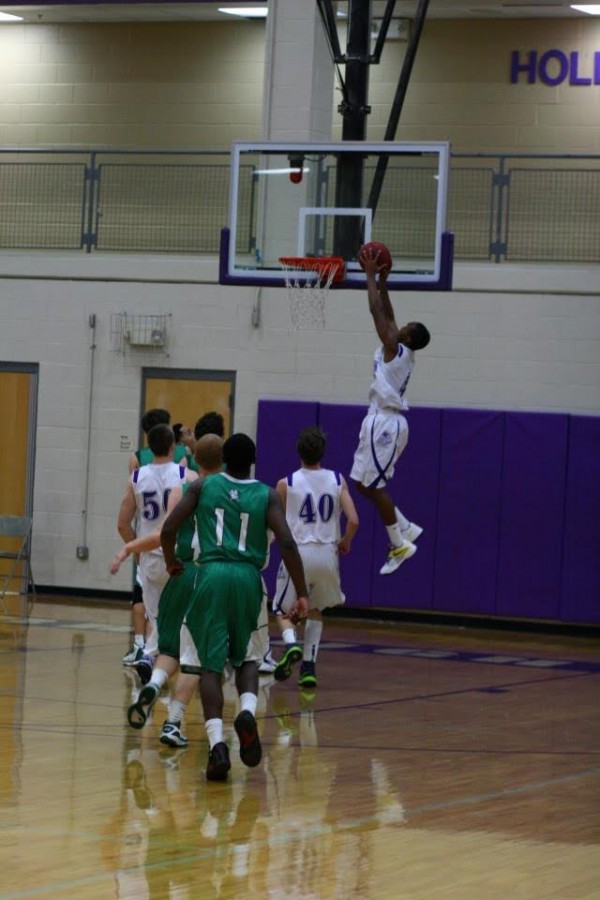 “DEVONTE GRAHAM with the basket!”

The familiar announcer’s call for those who attended Broughton basketball games a few years ago has now become a familiar sound to the fans of the University of  Kansas Jayhawks.

Graham was a three- year varsity basketball player at Broughton and graduated in 2013. At Broughton Graham carried his team to competing for a state championship in 2013.

“My senior year season going all the way to the championship game was my favorite Broughton memory,” Graham said.

Graham first committed to Appalachian State during his senior year at Broughton, but later was later released from his letter of intent.

“Broughton is where I started, it helped me get my foot in the door with recruiting and gaining exposure. Coach Ferrell & Coach White helped me maintain confidence in my ability at all times, pushing me to be my best and it has paid off,” Graham said.

After Broughton, Graham played a year of basketball at Brewster academy.  Graham then committed to Kansas University.

“On my visit to Kansas I just fell in love with it.  I loved the coaches, players and everything about the campus. Felt like I was at home. Plus I wanted to go somewhere where I had the chance to win conference titles and possibly a national championship,” Graham said.

Kansas is an established basketball program who has had continuous success. Last year the Jayhawks won their 11th straight Big 12 Title.

The Kansas Jayhawks, with a record of 13-1 are currently the top ranked team in the country. Graham has made big contributions to the Jayhawks team as they begin their conference play. Graham battled through various injuries last year but this year Graham starts for the Jayhawks.

“Freshman year I was a backup PG. Now I start. My role is just to be a leader, vocally and by example. I usually defend the opposing team’s best offensive guard,” Graham said.

“My favorite part about Kansas is our fans. No matter where you go around Kansas people recognize you and want to take pictures.   We sell out every single game, even exhibition games that don’t count. Our fans camp out days before each game and even get to the games two hours before,” Graham said.

Tickets to watch Graham and the Jayhawks are extremely hard to obtain. Kansas has sold out 235 consecutive games at Allen Field House in Lexington, KY.

The Jayhawks have a target on their back because of their ranking and success in the Big 12 Conference. Having a target on your back isn’t such a bad thing.

“I look forward to every game because we have won the conference 11 years in a row and are currently ranked #1 in the country so everyone we play is going to be trying to beat us.   We have to bring our A game every single game” Graham said.

Graham is becoming a key member of this team. He can handle the ball, shoot the ball and defend the other team’s best player. Graham and the Jayhawks aren’t getting side tracked by their early success, they still have their eyes on the big prize in March.

“As a team we need to stay focus, not get complacent just because we are ranked #1. We have to get better each practice and game so in March we can make a run for the ultimate goal, which is that national championship,” Graham said.