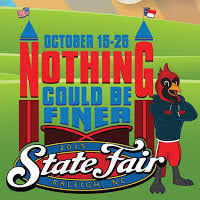 It’s that time of year again and students are excited. The air is getting cooler, the leaves are changing, the stores are (prematurely) stocking up on Christmas goods. Everyone knows what that means – the state fair is coming.

The North Carolina State Fair attracts nearly 1 million visitors each year. Originally it lasted from a Friday to the next Sunday, but due to an increase in attendance, it has been starting on Thursday for several years. Many Broughton students plan to attend this year.

The theme is “Nothing Could be Finer” and also features a friendly mascot named Casey Cardinal. Some special new events include free western-style riding lessons in the Hunt Horse Complex and  very modern selfie stations at gates one, eight, and nine. Perhaps the most exciting new feature will be the “rabbit agility demonstrations” where bunnies show off their mad hopping skills.

But the best part of the fair, according to students, is the food. Freshman Mikaili McNeill’s favorite fair food is butterfly chips.

“Butterfly chips are deep fried potatoes and they have cheese with bacon on it.” McNeill said.

The rides are another popular attraction, though opinions about them vary. Freshman Raul Nicolas loves rides, especially the Dropzone. Others, however, have concerns about safety.

“I think the rides are a little sketch.” said Junior Meredith Lee.

“I’m not allowed to go on rides. My mom doesn’t trust them.” said McNeill.

As with previous years, this year’s fair with feature a slew of performers. Jason Michael Caroll, FireHouse, Charlie Daniels Band, and Kasey Tyndall are just a few of the musicians performing at the free concerts each night at 7. Nuv Yug (presenting Bollywood Night) and the salsa group Orquesta Gordel will bring their own international twist.

There’s so much to be excited for at the 2015 NC State Fair that it can be hard to wait. So here are some pre-fair tips to pass the time: buys tickets in advance, adult tickets are only $8 until October 15; check out the fair schedule at ncstatefair.org to get pumped and plan your day; and of course add Casey Cardinal on Snapchat at CaseyCardinal1. See ya on the Dropzone.