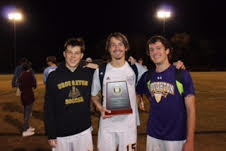 The men’s soccer season is long over but the accolades keep coming for some of the team’s seniors. The team’s success and deep playoff run allowed several members of the team to win individual awards.

“It feel good being rewarded for all my hard work. I couldn’t have done it without my team, and the individual awards don’t matter as much but it still is a nice feeling ya know, a recognition of my hard work over the past four years,” Brickhouse said.

Brickhouse and Krueger won a few other honors of their own. Both were named to the News and Observer All-Metro team and will participate in the annual East/West All-Star game in Greensboro at the beginning of this summer. Krueger was named to the All Mid-Atlantic team (the Mid-Atlantic region includes states North Carolina, Virginia, Delaware, and Maryland).